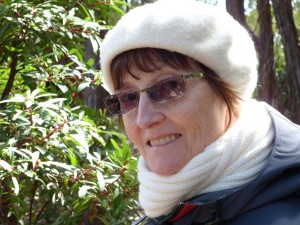 From Left to Right: Christine 2009, Christine in London at London publisher 2010 & Christine giving talk in Sydney 2010

Christine started her career as a biochemist working in the pharmaceutical industry in the UK, and then moved into science publishing in the UK, Holland, and Australia. She worked at CSIRO for a decade, in research and knowledge translation.  Christine then became a senior executive in the Australian public service, providing advice to the Prime Minister on science and technology. She was responsible for the $130 million Cooperative Research Centres Program.

She was awarded the Public Service Medal in 1994, for her outstanding service to science and technology – just one year before diagnosis.  She has an Honours Degree in Biological Sciences, a Graduate Diploma in Pastoral Care and Counselling, and a Master’s in Business Administration.  She was a Queensland finalist for the Senior Australian of the Year Award for her advocacy for people with dementia. Christine was also presented with an Alzheimer’s Australia (Qld) Ambassador Award, in 2014, by Ita Buttrose. in 2016 she was made a Member of the Order of Australia (AM) for her advocacy work. In 2017, she obtained a PhD in Public and Contextual Theology from Charles Sturt University. Her most recent book, “Will I Still Be Me?“, is based on this Thesis.

Following her diagnosis with dementia in 1995, she wrote her first book “Who will I be when I die?” (first published in 1998, reprinted several times since then; new edition by Jessica Kingsley Publishers, London, in 2012).  Christine has been a passionate advocate for people with dementia, addressing conferences around the world and appearing in the media.

Christine has been very active in Japan. Her books, media appearances and talks made a significant contribution to the overall effort to improve the support for people with dementia and their professional and family caregivers.

Christine wrote her second book, “Dancing with Dementia” (Jessica Kingsley Publishers, London, 2005), in response to many requests for updates on her life. It was commissioned by the Japanese publisher of her first book, for launch at the international conference in Kyoto in October 2004. The book talks of how she met Paul, and describes what it is like to have dementia and what you can do to help.

Her first two books have been published in several languages. She has now published a selection of her talks, Nothing About Us, Without Us (Jessica Kingsley Publishers, London, 2015), and her memoir Before I Forget (Penguin Random House, Australia, 2015).

Christine is a mother of three girls and now has survived dementia for long enough – defying all medical expectations – to become a grandmother to four delightful children.  Her new life in the slow lane of dementia has become fulfilling in so many ways.  As she says:  “Live each day as if it is your last day, and enjoy each moment to the full!” Christine is a survivor and holds out the beacon of hope to all those being diagnosed, and to their families travelling this journey beside them. She continues to submit articles to research journals in the fields of disability, spirituality and religion, and examining living with dementia.