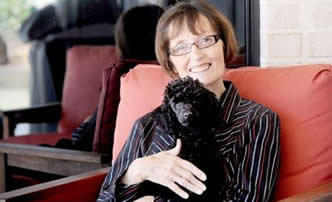 Christine is a dementia survivor, talking about what it feels like and what you can do to help in the ongoing battle against brain loss.  Issues that ignite her passion include standards of palliative and residential care, stigma and the need for a dementia-friendly society, early diagnosis and treatment, and the need for cures for the many diseases that cause dementia.

Christine’s message is always an inspirational message of hope and survival. She has attended and has spoken at many Alzheimer’s Disease International (ADI) conferences, working hard to change attitudes towards people with dementia, and to talk about what it is like to live with dementia and what issues need to be addressed.

Christine has seen progress in the worldwide Alzheimer’s movement to include people with dementia at conferences, and in increasing the level of encouragement and support. But there is still a very long way to go before people with dementia are no longer discriminated against, and before we achieve a global dementia-friendly society.

Christine was part of a live panel discussion on ABC radio on the 20 August 2014 in Canberra, hosted by the Alzheimer\’s Australia Dementia Research Foundation as part of National Science Week.  The topic was towards a world without dementia – prevention, cure and care, and it was broadcast on ABC radio national.

Christine’s story was featured on the ABC’s Australian Story, broadcast on 30 June 2014 and repeated a few times since then.

Christine was presented with an award for being Ambassador for Alzheimer’s Australia (Queensland), for her work in trying to create a dementia-friendly community.  It was presented by Ita Buttrose at a Bring It To The Table event in Brisbane on 6 June 2014.

In 2012, Christine was nominated for the Australian of the Year Award, and was the Qld finalist in the senior category – QLD Finalist. In 2017 she was made a Member of the Order of Australia (AM) for her advocacy work.

Christine was a member of the Steering Committee of the Qld Statewide Dementia Clinical Network, and a Consumer Member of Caboolture Hospital Clinical Council from 2015-2016. She was also a member of the Cognitive Impairment Advisory Group of the Australian Commission on Safety and Quality in Health Care, as well as a member of the Alzheimer’s Australia Consumer Dementia Research Network from 2010 – 2015. As a representative of this network she was appointed to the Scientific Panel of the Alzheimer’s Australia Research Foundation in 2014. Through this work, Christine was once again involved in research proposal assessments and decision making, as she had been before her diagnosis.

Now Christine is an Adjunct Research Fellow of the Public and Contextual Theology Centre of Charles Sturt University, following her PhD research.

Christine continues her battle against ongoing brain damage, yet is still writing as an advocate for all those unwilling or unable to do so.

Below is a high-resolution MRI scan, taken by Neuroscience Research Australia, in Sydney in September 2011.  The comparison of an age-matched normal is on the right, to show how much damage there is to Christine’s brain, which is on the left.

It is clear that Christine has considerable brain loss, but functions as best she can, writing, speaking and travelling with the enabling support of her husband, Paul.  She often says that if only people could see the brain damage, they would cheer the dementia survivors. Christine questions attitudes towards people with dementia, which can often be patronising and demeaning, lacking in understanding of the difficult battle to cope each day with ongoing brain loss.

Christine is driven to continue her advocacy as a survivor, encouraging others to follow in her footsteps, speaking out to improve services and support for people with dementia at all stages in their journey from diagnosis to death.